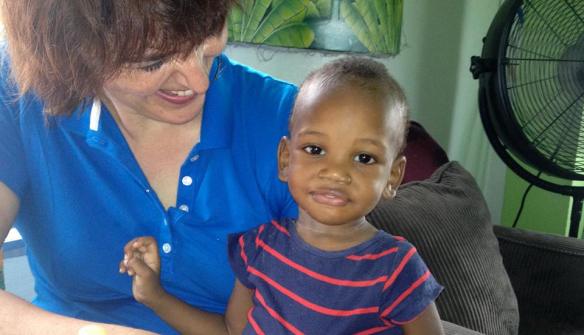 We love this little boy.

Laurentz was 15 months old when we met him. Late on that first evening, I held him in my arms and he fell asleep. Sitting for a good while in devotions with the kids, he became sweaty against my shoulder. I adjusted him to lay on my lap, his head by my knees, his little feet resting on my belly. His arms fell to the sides – outstretched. I laid my hand on his chest and I prayed for him. I prayed that God would protect him, that he would plant a love for him in his heart from an early age. I prayed he would become a man of God with a heart for people. I prayed that God would watch over him all of his days – and that should it be in his plan, that we would get to love him as our son.

It was an intense moment. It stays with me still, nearly 39 months later. We began the process to adopt Laurentz. His birth mom was unable to care for him and had signed papers releasing him. We submitted our dossier and the journey began.

Last week, in an unexpected turn of events, Laurentz’s birth mom came for him and took him from the orphanage. She gathered his belongings. She left, little Laurentz in tow.

In a perfect world, we would celebrate. What better thing than for a mom and son to be reunited, for our boy to be raised by his birth family and to live in his home country? Family restored. Life renewed. Hope again.

I want the very best for Laurentz.

And yet I fight worry for him. I’m sometimes overwhelmed with the sadness. In my brain, we would either love him here or love him there. It never occurred to me that we might never get to see him again.

And that’s a distinct possibility.

In two days we have our final birth parent interview. If his mom doesn’t come, the US will officially deny the adoption. At this point, it’s looking like we will not get to bring our little boy home.

But still we pray. We are taking these few days leading up to the interview to pray intensely for his life. We don’t want to lose him, but we trust God. He knows Laurentz, He loves him. He knows his mom. He knows what is best and He knows the plans He has for that beautiful little life.

We love him too. We want him to grow into the man God created him to be. We want him to be safe, loved, delighted in… We want his future to unfold with great adventures on the horizon and deep wells of love to tap into as he pursues them.

He has the best smile and we want him to smile a lot… even if we never get to see it.

It would be arrogant of me to assume we are the best parents for Laurentz, so yes, while we love him like crazy, we do trust that God may have other plans.

Of course that doesn’t make the potential loss any less.

Will you please pray for Laurentz? Pray for his mama. Pray for his family there. Pray for his best to unfold and for us to celebrate God’s goodness in the midst of our own emotions. Laurentz is a sweet, sweet boy who deserves big love and a bright future. And should it be that his future is with us, pray his mama comes to the interview and gives us the chance to raise him. If not, may God strengthen her to be a wonderful mama who kisses his cheeks and wipes his tears and equips him to live a full, beautiful, glorious life. Oh God, please bring your best to Laurentz …. wherever and with whomever that may be. You are good and we hold on to you, even when the emotions flood our hearts and seep out of our eyes. Watch over Laurentz – for all the days he has on this earth, my God. He is a beautiful boy and we love him.