I’m a very responsible traveler, so before our trip, I checked for any potential travel warnings for Haiti. Sum it up? DON’T GO!

Since the earthquake, things have been dicey. No infrastructure. Little police help. “Whatever you do,” the state department warned (and I’m paraphrasing here), “Don’t leave the airport, rent a car or get in a taxi. You could be robbed, kidnapped or murdered. Or,” they added, “if you get in trouble with the police, they can throw you in jail and leave you there forever.’

Now when I contacted the orphanage, the director reminded me that large groups of teens come through on mission trips every week… teens, seniors, families, kids… and they’ve never had any trouble. I sensed a “Buck up girly” behind her gracious response.

But I admit, I was still grateful Brian and I were going together on this first venture.

See, I had a speaking engagement in St. Louis, so I flew there Friday. Brian drove from Colorado to St. Louis and met me there. We were to fly out at 6:00 AM the next morning. We arrived at our hotel and Brian walked over to his computer bag, “Honey, I don’t have my passport,” he said, joking.

He looked in his bag and suddenly grew serious. “Wait a second. It’s not here.”

I looked at him. “Seriously?”

He rustled through his bag.

Remember how I said I was a great traveler? Well, per state department regulations I had taken his passport and made copies (should all heck break loose, I’m sure that color copy of our passports would have played some important role in saving our tushies). What I didn’t do was remove the passport from the scanner and place it back in his bag.

Brian was gracious and we quickly got to work to fix the problem. We tried to fly the passport from Denver to St. Louis. We wondered about driving. All was fruitless. I’d have to go to Haiti alone while Brian flew to Denver, got the passport and met me in Haiti a day later.

As soon as we were in the mood for joking, Brian wondered out loud if I planned it all so I could meet the boys and bond with them first.

We went to the airport first thing in the morning. We smooched goodbye and off I went to Haiti. By myself.

The plane landed in Port au Prince and I exited into chaos. Thankfully I’d only packed a carry on, so I didn’t have to wait for luggage or try to negotiate its release. I walked to the exit and looked for the driver, a pastor at the orphanage. I spotted the sign he was holding and quickly made my way to him. We turned toward the parking lot. I nearly tripped over his heels following him closely, all while avoiding eye contact with any potential bad guys. There were tons of vehicles parked in every direction. People were pressing in on every side.

We got to the car when I spotted the army truck filled with armed UN guards. I did my best to look nice and legal and like I rarely cause trouble. It was difficult.

We waited in a long line of cars before finally getting out of the airport. There are no actual lanes in Haiti. Sometimes it’s three cars on one side of the road, sometimes it’s three on the other. It’s just who gets around who the quickest – and who is biggest – that determines right of way. We played chicken a few times and I tried not to gasp out loud or make it obvious that I was holding on to the door strap. At one point, we turned off the main drag onto a long dirt road. I wondered if maybe this whole thing was a big scam to kidnap me.

Then I remembered how un-kidnap worthy I actually am.

We pulled up to the orphanage gate. Pastor honked and an armed guard opened up and waved us in. It was like an oasis on the inside and I eagerly looked around. All else forgotten. Where are the boys?

I was met by a lovely woman who works on site and she escorted me up to the director. M is the director, beautiful inside and out—an angel who has spent years rescuing little ones from malnutrition and abuse. She brought me to the boys.

Three-year-old Lovence immediately held his arms out to me and I scooped him up. That must have been a little too close because he quickly reconsidered and reached for M. From the safety of her arms, he looked at me with curious brown eyes. I picked up 18-month-old Laurentz and held him in my arms. He was far more used to being held and nestled in.

What a surreal feeling to think I might be holding my sons. I planted a zerbert on Laurentz’s neck and he giggled.

That’s a sound I could get used to…

I spent the rest of the day immersed in moments:

Helping Lovence eat his dinner. He’d been so starved that he eats quickly, afraid it will be taken from him. I held him on my lap and watched his little cheeks fill up like a chipmunk. My heart broke for a baby boy fearful he may never get to eat again. Later I watched him carefully smash open almonds and pick out each little nut. He’s incredibly smart and already seems to understand much of what’s going on around him. He has made such progress since first arriving at the orphanage. When he first arrived, he hadn’t even been able to stand. Now he is standing and even walking as he holds on to the hands of his nanny. When he does stand, he looks at you with sheer delight, laughter bubbling out – so proud of himself.

Over dinner I talked with other adoptive parents who were on site – incredible women whose hearts are kind, generous and faithful through what has been a long, painful process. They say it takes up to two years to bring children home from this battered country – and yet people are fighting for their kids, doing all they can to love them through the wait.

And then in the early evening, I sat with M on a porch swing and heard the incredible stories of these children: stories of heartache, abandonment and ultimate rescue.

Finally, one of my favorite moments was helping Lovence with his bath. Remember, Lovence was found abandoned in a mountain village three months ago. He was near death when they found him and covered in dirt from head to toe.

So he loves the water.

I gently poured the water over his head and he laughed in absolute delight, flapping his little arms in the air. Then he’d wipe the water from his face and look with expectation for me to do it again. At one point, I held the cup over my own head and let a little spill onto my hair. It rolled off my hair onto his head and his eyes went wide as he laughed out loud.

His joy was contagious and bright and beautiful.

I ended my first day so full and yet a little overwhelmed. Do we have what it takes to love these boys through this life? Do we have what they will need to know hope and wholeness? Can we give them the security and love they so achingly deserve?

I went to sleep with a prayer on my heart. “God, show us. Fill our hearts with love for these boys if this is your path. Give us unwavering conviction and a deep passion for their future.”

And so ended day one.

Soon I will post day two of our visit: Brian’s arrival and the love connection he made with these babies. It was so incredibly Hallmark card kind of cute – I can’t wait to fill you in.

But first, a few pictures from the first day. More to come…

Laurentz, just moments after meeting him for the first time. 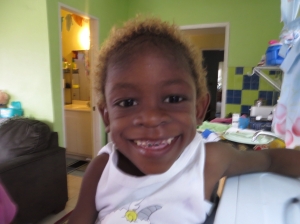 27 thoughts on “Passport issues and baby boys: Day one”